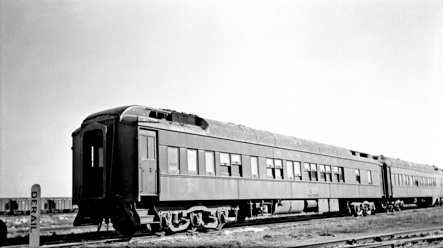 Built as the “Gothic Peak” for use in the Pullman pool of sleeping cars assigned to the Atchison, Topeka & Santa Fe Railway (ATSF).  This is a 10 section, 2 drawing room sleeper.  Each section consisted of two seats during the day and two berths at night. The berths were created by the two seats being moved together creating the lower berth and the upper berth folding down from the wall above. The two drawing rooms were deluxe private rooms with two seats similar to the ones in the sections and a couch that converted to a bed. The drawing room also had a private sink and toilet. Open section sleepers were the most commonly used sleepers before World War II. After the war modern streamline passenger cars with private accommodations demoted the older heavyweight cars, especially open section cars, to secondary service.

This car was named for a 6213 high mountain peak located east of Seattle, Washington. Bought by ATSF in 1953 and renumbered #1129 and used as a chair car on secondary trains.  Converted as a MOW Forman Sleeping and Shower Car and renumbered M/W194286, the drawing rooms were converted to showers but the the rest of the car retained its open sections as used in Pullman service. The car ended up in work trains in Southern California around San Bernardino and Bakersfield.

According to the Santa Fe Passenger Train Consists, January,10, 1937, Wayner Publications, 1971, Gothic Peak was one of 38 cars of this type assigned by Pullman to the Santa Fe.