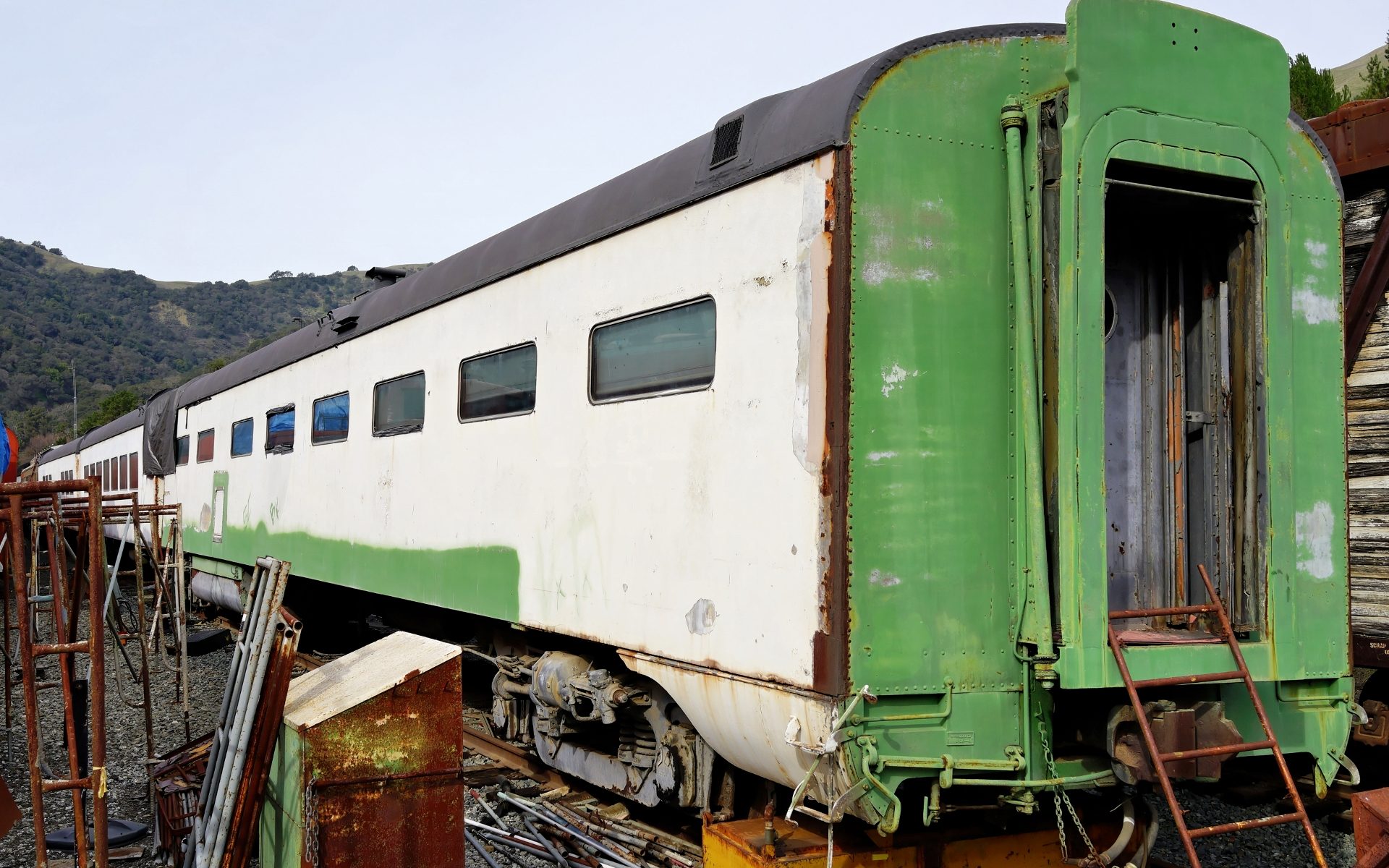 The car is called “The Cascade Club.” It weighed 335,000 pounds when built by the Pullman-Standard Company in 1949, is over 200 feet long, and connects three complete railcar bodies semi-permanently over a single suspension comprised of only four bogies (trucks), where six would usually be needed to support three individual cars.

As a Dining Car and Bar Lounge, it was the social hub at the center of the Southern Pacific Railroad’s first class “Cascade” overnight all-room sleeping car train from Oakland, California to Portland, Oregon.

The SP 10282 unit housed comfortable lounge chairs and a mirrored half-circle bar. The center unit, SP 10281, contained sit-down dining tables for up to 56 passengers. The SP 10280 unit contained the kitchen and pantry, and also provided the dining car staff with three-tiered bunk and shower space for eighteen crewmembers — traditionally African American chefs, cooks, dishwashers and waiters — and a sleeping room with two berths for the Caucasian dining car steward.

The Dining and Lounge sections featured wide portals between the units, where most other cars had only narrow, noisy connecting doorways. Guests could sit in blue leather banquettes near these intercar connections while awaiting their tables, watching with fascination as the large linoleum-covered flooring discs over the coupling would turn ever-so-slightly with curves in the track. The overall effect of the “Cascade Triple Unit” was to connect the lounge to the dining area as one uninterrupted, lively and luxurious space. Adjacent to the blue banquettes was a radiotelephone booth, where businesspeople and familes could dial home from the train.

As a Lounge-Diner-Kitchen-Dormitory, the car is one of only two such car types surviving at the time of writing, and one of only sixteen total triple-unit car types ever built in the United States, all for the Southern Pacific Railroad between the years of 1939 and 1949. Our Niles Canyon Railway car once had an identical twin, and both cars exclusively served the northbound and southbound “Cascade” trainsets for their entire duration of service 1949-1968, when both were retired and our car’s companion set was scrapped.

The car escaped scrapping by being sold into private hands, and was operated briefly and then stored in Jamestown, California. In the 1970s, plans to use the car in the consist of the barnstorming bicentennial American Freedom Train went as far as having the car painted in a base coat of white, and having much underbody equipment stripped for upgrading. Those plans were dashed by the car’s heroic dimensions, once it was learned by AFT organizers that the car was too long to fit the display tracks available in many of the train’s desired stopover towns and cities.

Under ownership by the Pacific Locomotive Association, the car has undergone necessary stabilization, with a new long-term green seal coat to prevent leaks, and new sheet metal to replace areas where constant dishwashing had trapped water deep within the car sides, causing significant structural corrosion. The kitchen unit has a noticeable lean, and will eventually have to be separated to inspect the suspension and intercar couplings.

Ongoing restoration efforts of the interior and exterior are paused, awaiting precious shop time, volunteer labor, and funding. Meanwhile, the car is stable against the elements, and is a unique preserved artifact of rare and innovative American passenger car engineering.