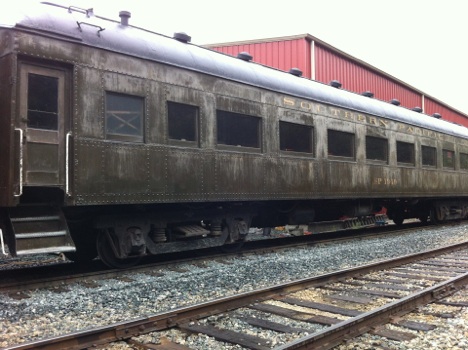 Introduced in 1906, just before Henry Ford made his famous model “T” automobile, these cars were the defining characteristics of steam passenger trains for the Union Pacific, the Illinois Central, the Southern Pacific and other associated railroads. For the traveling public, they were a step up from wooden coaches that would break like a match stick in the event of a derailment. So durable were these all steel cars that some lasted in service until 1968 … A life-span of 60 years! Well, the 1949 is now over 100 years young and still in service on the Niles Canyon Railroad.

Built new by the Pullman Company,  Southern Pacific Railroad (SP) #1949 was part of the first full order of Harriman Lines Common Standard Wide Window Steel coaches (delivered 1909 to 1912). The car was used in San Francisco to San Jose commute service and then later at the McCloud River Railroad (Not lettered or used) in McCloud, CA. The car was  acquired by the  PLA in  February 1970 and is currently in service on the Niles Canyon Railway.