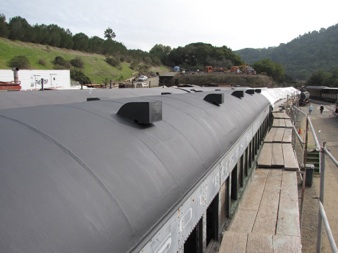 Delivered new as Southern Pacific Railroad (SP) coach #2154 for commute service on the Peninsula between San Jose and San Francisco in October 1924; Retired in 1985 and sold to the California State Railroad Museum; acquired from the CSRM in 2008 after years of damage/vandalism while stored at the ex-SP Sacramento Shop yard.  Damaged by falling oak tree, winter 2010.  The roof was repaired and coated in 2011. In 2012 the car was moved to Brightside yard in anticipation of starting restoration

This is an 80’ / Steel, Round Roof Heavyweight Suburban Commute / 60 tons