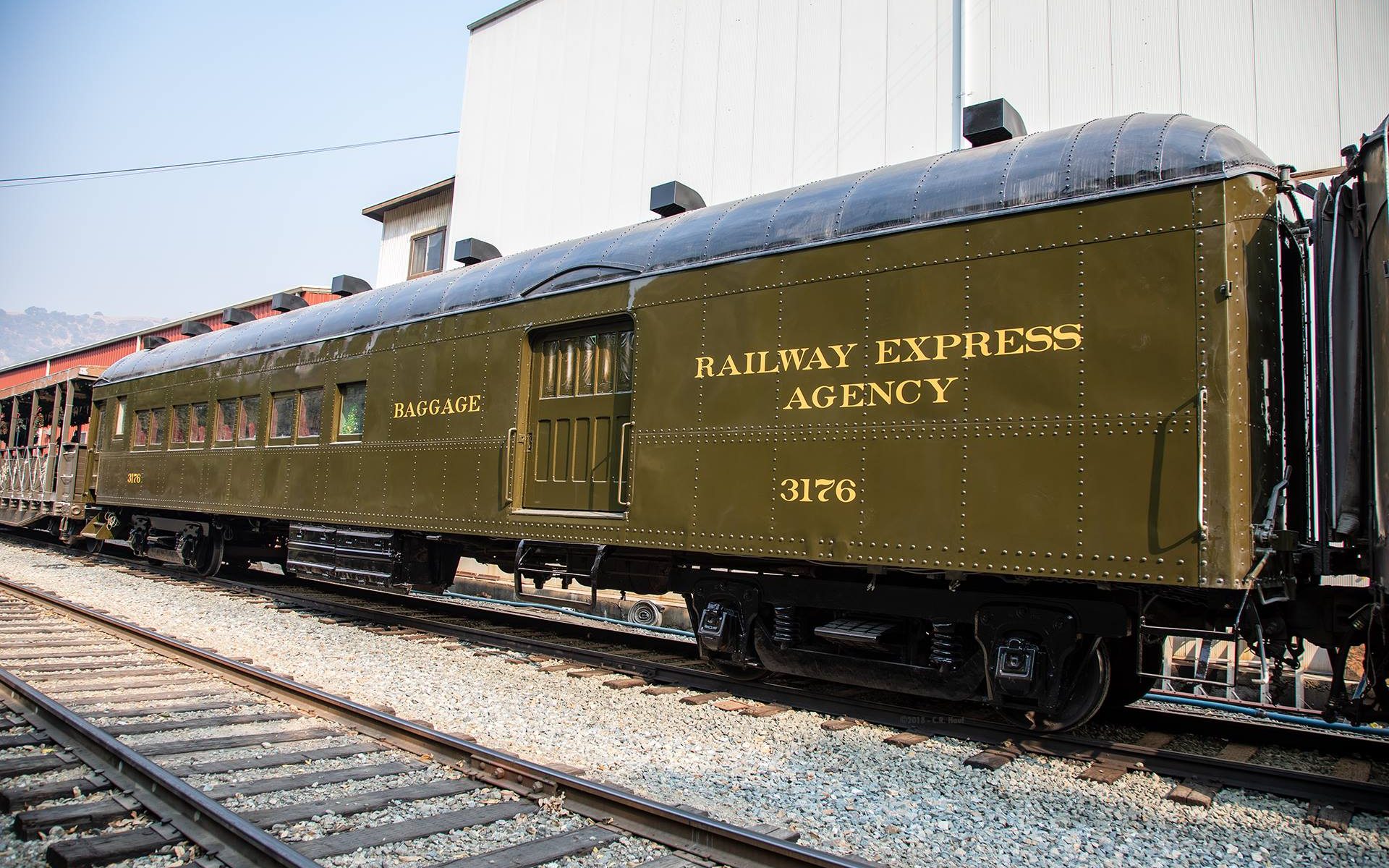 This car is a heavyweight Common Standard Class 60-CB-1 Sixty Foot Combination Baggage-Coach. The car was originally constructed by the Pullman Company, Lot 4396, Plan 2925, in February of 1916. It was delivered to Southern Pacific subsidiary Arizona Eastern Railway (AE) as their #453.  On December 31, 1924, when the AE was absorbed into the SP, the car was renumbered as AE #3176; and again renumbered as SP #3176 in 1932.

In 1946 it was shopped, the upper window sashes were plated over, and the car was painted into the famous Daylight paint scheme for use on the SP’s Sacramento Daylight, trains 53-54. It served in this capacity from 1946 to late 1950’s, carrying passenger luggage and express shipments, and serving as the train’s “office” for Conductor and Brakeman. It was not air-conditioned, as were most other cars in the train.

Following removal from regular service, the car was kept in reserve and spotted on a track near the SP West Oakland Shops. California-Nevada Historical Society principals Bruce Heard and Eldon Lucy entered a purchase agreement with the SP for $1000. During one of his frequent checks of the car’s status, member Heard discovered that the car had been moved to the on-premises scrapyard. He immediately contacted Cal-Nevada President Lucy, who was told by their SP contact that it was too late to save SP 3176: the scrapyard had paid SP for the Combine. The duo were offered other cars in its stead, but Lucy and Heard held firm to SP 3176 and their pre-existing agreement. Based on the previously cashed $1000 check, Heard and Lucy were acknowledged as owners, and SP 3176 narrowly escaped the torch.

Heard and Lucy eventually donated the car to the Cal-Nevada group.  The car served the society on various sponsored excursion trains, which included a well-documented trip on the SP to Northern California for a trip over the McCloud River Railroad from Mt. Shasta City to Pondosa in June 1962.  This excursion included the McCloud’s steamer #25 and Yreka Western steamer #19.

For a short time in 1969 – ’70, the car was on loan to the Pacific Locomotive Association, undergoing repairs, and where it served on its Castro Point Railway museum in Richmond, CA.

In 1971, Cal-Nevada arranged a lease with the Sierra Railroad for use on its regular tourist and movie service; including being part of Railtown 1897 State Park at Jamestown, CA.  While there, it received a new paint job into SP’s heavyweight standard color, Dark Olive Green, and had another re-lettering as Sierra Railroad #3176, later named “Calaveras” #11.

At the conclusion of Sierra Railroad service in 1979, the car once again came under the care of the PLA. It left the Sierra on September 7, 1982, to return to Castro Point. Upon conclusion of operations there, the car joined much of the PLA’s collection in a “hospital train” on a trip to the Oakland Army Base on February 23, 1986, in storage for several years while awaiting a new museum site. The November 1998 issue of the PLA’s member newsletter, the Club Car, includes a photo of the AE #453 being delivered to the Niles Canyon Railway at Sunol, CA by highway truck.

On February 1, 2014, Cal-Nevada membership generously donated the AE #453 to the PLA for permanent care, use and display. An anonymous donor contributed, as a memorial tribute to Sy Stein.