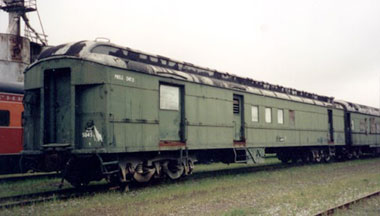 This car was built new as Southern Pacific Railroad (SP) diner #10141. Air conditioning was added 1932; Rebuilt in 1954 as a RPO/Baggage #5045 at the Southern Pacific Sacramento Shops: Reported to be used in wrecker service:  sold to numerous private parties until the Golden Gate Railroad Museum bought it in the early 1980’s.  Purchased by the PLA Dec 2005.  Moved to Niles Canyon Feb 2006.  Stored Sunol, CA

This car is another example of how the railroads reconfigured passenger cars to meet their current needs. The Niles Canyon Railway is no different. In June, 2012 a conceptual plan was presented to the PLA board of Directors to restore and use this car at the Sunol Depot as gift shop. Of course, should the plan go forward, no modifications to the car would be allowed that would prevent it from restoration as an RPO Baggage at some time in the future