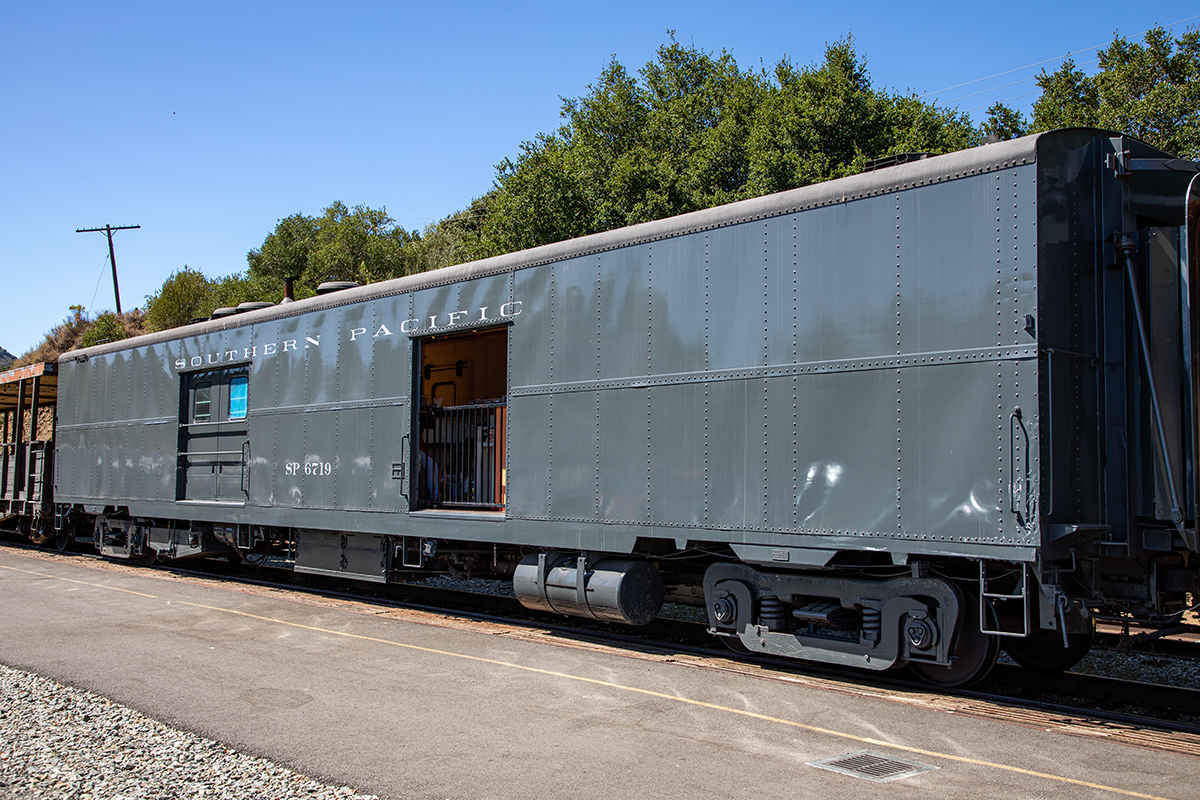 Built new for Southern Pacific in 1962 by Pacific Car & Foundry, this lightweight Mail, Baggage, and Express car was one of 100 copies reluctantly ordered by the railroad as replacements for similar cars built as early as the 1920s, and which had far outlived their useful lives.

They were ordered at the outset of the final decade of SP’s passenger train service, already running at a considerable loss due to airline and superhighway competition. Their simple construction gave them the nickname Economy Baggage — probably intended as much to reassure stockholders as it was to indicate the the spartan nature of the car’s construction.

SP 6719, although most would call it a “baggage car,” never was actually intended to haul passengers’ luggage. One of 65 identical MBE (Mail, Baggage, Express) siblings, our car was meant for mail and express shipments, bulk magazines and catalogs, and storage mail that was sealed and not sorted enroute. A near-identical 35 cars had facilities for an onboard Train Baggage Man, and offered the employee basic heating, an office desk, a coat closet, better fresh air ventilation, and enclosed sanitary facilities. Lacking those amenities, SP 6719 very likely criss-crossed the country in MBE service, traversing many more U.S. railroads besides the home company’s passenger-carrying routes. It was also fully capable of being handled in freight trains, expanding its value to the railroad.

But it was not built for heavy lading or all-purpose freight hauling. The car was retired on December 23rd, 1970.  It was leased briefly to Amtrak, although it never was painted into their colors. The car was later purchased by a private owner, and the interior was converted into a house. PLA acquired the car and moved it to Niles Canyon in the big move of January 8, 2005.

The utility of these large, open cars with wide loading doors gave them a useful afterlife as Tool Cars for railroad maintenance service, or as storage for railroad operators, guaranteeing a disproportionately high survival rate. Many can be found in railroad yards, tourist railroads or shortline back lots to this day. But in 2018, SP 6719 gained the distinction of receiving bodywork and fresh paint done to its original 1962 appearance; at the time of writing, it’s the only Economy Baggage car that’s been restored to original SP passenger train livery.

Ever a useful type, the car has been converted into a support car for NC Railway trains, and is currently in use as a generator car with added bar and bathrooms for passenger operations. It’s available and is a regular sight in train service on the Niles Canyon Railway.