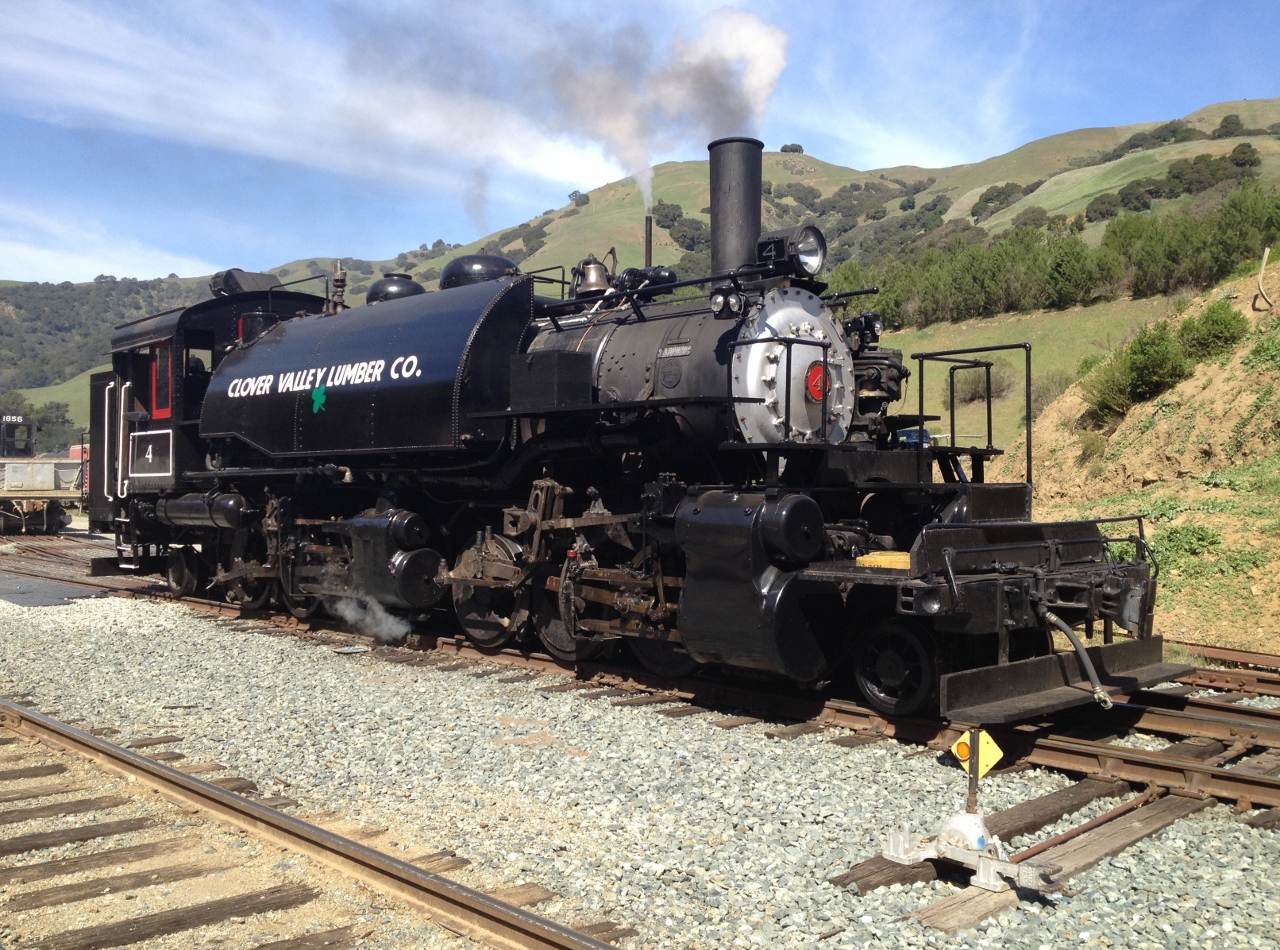 Baldwin had started the construction of tank mallets in 1910.  By 1924 when the #4 was built, the design had been perfected. Two sizes in one of four models were available to those interested in obtaining one of this type of locomotive. The models included a tender version, a side tank version, a full saddle tank model, and a split saddle tank version. It was to be the split saddle tank version that was to prove the most popular, and one of the first of these was the #4.  Today, only two split saddle tank mallets remain, one of which is the #4.  It is interesting to note that at least one of each of the other models remains. The group at Puget Sound at Snoqualmie, Washington has a tender version, a side tank model belongs to Chris Baldo at Willits, California, and the Black Hills Central at Hill City, South Dakota has both a split saddle and full saddle tank version.  A number of other logging mallets also remain, but they have been modified from their original design.

The #4 was built for the Clover Valley Lumber Company and operated out of Loyalton, California which is not too far from Portola. In late 1956, the Clover Valley Lumber Company sold out to the Feather River Lumber Company, but the rail operation remained the same. In late 1957, the railroad became history when the logging operation switched to trucks. It was at this time the #4 was sent to the Tahoe Timber Company’s mill near Reno for stationary boiler service. That service lasted only a few weeks, but the locomotive was to remain there for many years.

In 1973, the late Greg Gregory who was a P.L.A. member living in Reno, arranged for the donation of the locomotive to the Association. The real problem was in moving the locomotive. Frank Fontes, a person I have mentioned previously, undertook the physical work of moving the locomotive. The first thing he did was to make a trip to Reno in order to secure those items that still remained on the locomotive to prevent them from being stolen. He was fortunate to have a letter granting the necessary permission to carry out that work, as he had hardly started, when an individual showed up with a shotgun wondering what he was doing. The letter saved him. He returned with the headlights and spot plate, but the bell, whistle and builders’ plates had already been stolen.

Not one, but two moves were required in order to get the locomotive off the property in Nevada. The locomotive was sitting in a position where it could not be loaded on either a flatcar or a truck. There was a spur track about a third of a mile away, and using snap track and a small crane, a weekend was spent moving the locomotive to that spur track. Once on the spur track, Frank returned to Reno and pulled the front or low-pressure engine out from under the locomotive. In all, I think Frank made about eight or nine trips to Reno in order the get the locomotive moved.

The big day for the move was scheduled for the week of July 8th, 1974. To make things interesting, it rained on the 8th and 9th, which was the first time it had rained on those dates in Reno’s history. The move had been planned, but the PLA team did not count on the trucks that were going to handle the move having mechanical problems. The primary truck broke down and did not make Reno until Wednesday (it was supposed to arrive on Monday), and it promptly broke down again. In sympathy, the smaller truck, which was to carry the low-pressure engine, also broke down. While we had a large crew on hand, the delay caused most of them to leave, and left only a handful of us to remain to carry on the loading work.  The remaining crew included Dave Burla, Warren Smith, Bud Shaver, Frank Fontes, and his son, who handled the loading job.

The actual move went just as planned, with the low-pressure engine arriving on Thursday and the rest of the locomotive on Friday. The unloading went smoothly; fortunately, the truck did not break down again until after the locomotive was off the trailer. The truck ended up spending the weekend at Castro Point undergoing repairs.

With the exception of reinstalling the low-pressure engine to the rest of the locomotive, and giving the #4 a new coat of paint, little was done to the locomotive until after the Standard Oil operation in 1977. The Standard Oil operation consisted of a special train operating over most of the Richmond Belt (with permission), using the #2 as power. From the experience gained with the operation, it was obvious that we needed additional passenger equipment, and two locomotives, both of which were more powerful than the #2. Heisler Number 5 was selected as one of the locomotives, while the #4 was selected to be the other.

While the Number 5 was operational, the #4 needed work, and it was started almost immediately. Probably the largest boiler problem concerned the super heater flues, which had been damaged while in stationary boiler service. “Bones” Andrews went to work and installed new ends to these flues, and a few weeks later, they were like new. In the summer of 1978, the work was complete, and she was steamed up for the first time in twenty years. There proved to be few problems, and the #4 was put into the pool of operational locomotives. However, a week before the scheduled Standard Oil venture, the operation was cancelled and thus the #4 never did handle the train for which she had been restored to operation. Originally the #4 was lettered for the Castro Point Railway, but around 1980, Lou Bradas and Jon Kirchanski repainted and lettered the locomotive to what she had been on the Clover Valley Lumber Company.

Between 1978 and the end of 1985, the #4 was in regular operation at Castro Point. In addition to passenger operation, she was also called on to carry out special operations on occasion. One of these was the movement of the former Western Pacific F-7, No. 918, into our facility at Molate Beach in 1982.

On December 1, 1985, #4 had the honor of handling the last passenger movement on the Castro Point Railway. When the #4 arrived at Molate Beach, the passenger carrying days on the railroad were over.

In late 1986, along with Heisler 5 and Shay 7, the #4 was moved out of Castro Point to Niles via a special train movement. The locomotives were put in storage along with other P.L.A. equipment.  On January 8, 2005, the #4 and many other pieces of P.L.A. equipment were moved into Niles Canyon and onto the Niles Canyon Railway.  The #4 remained in storage until June 2008 when rebuild commenced and she was test fired on May 5, 2012 and test run August 25, 2012.  The #4 has recent received extensive running gear work and is one of the steam locomotives used to power the Niles Canyon Railway’s trains.

Take a spin around the #4’s cab in this 360 image as it was just about to be lit off to bring steam up for a Sunday run. The #4 lives inside an RV tent so pardon the green outside the windows. 360 image – Christopher Hauf – Used with permission.

Want to learn even more about the history and restoration of #4, please visit our Steam Department’s website via the link below.