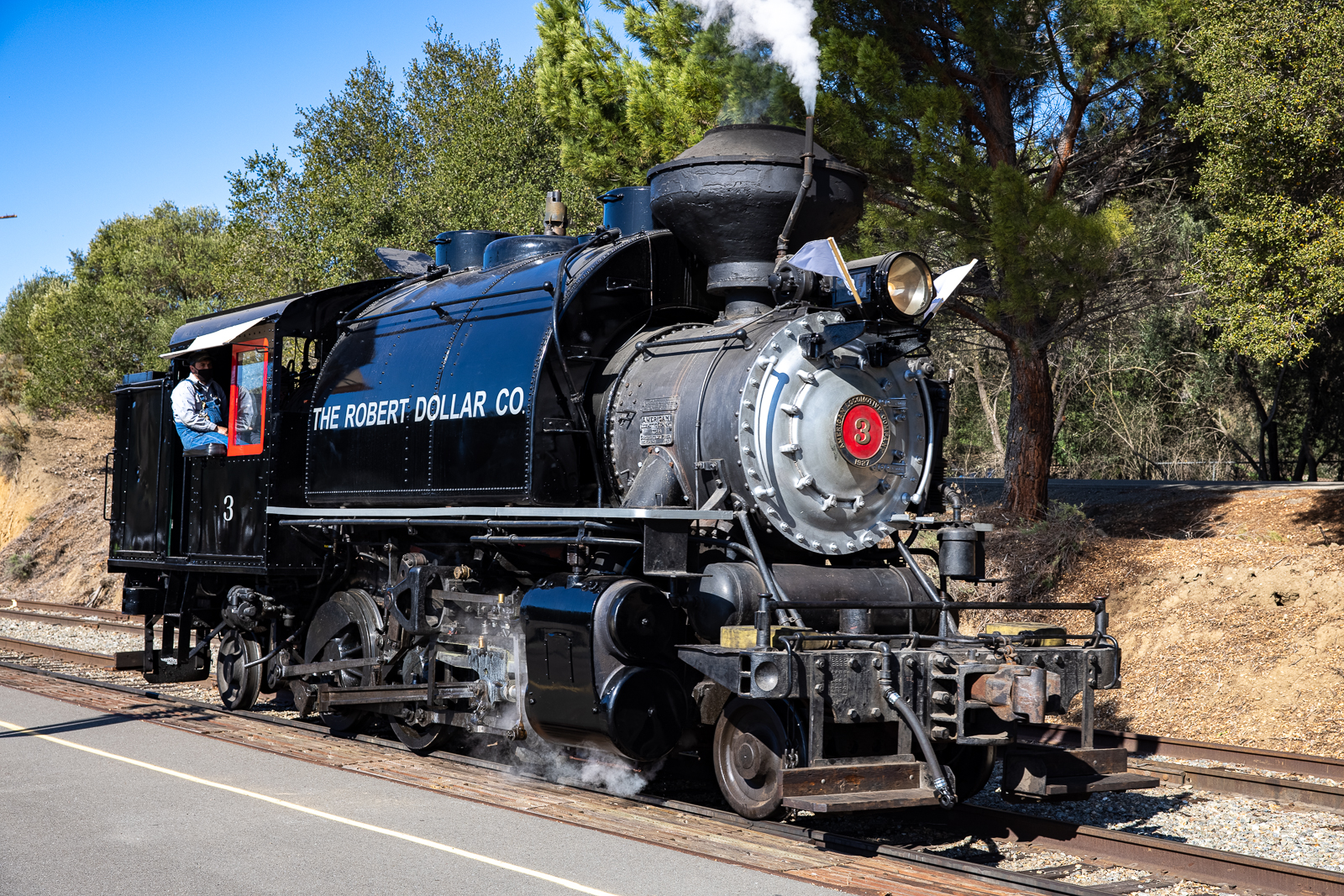 Note: Reportedly the last wood-burning locomotive built for use in the United States

The No. 3 was built for the Walter A. Woodard Lumber Company of Cottage Grove, Oregon, in November 1927 by American Locomotive Company (ALCO) of Schenectady, New York. It was built as a wood burner, and is reportedly the last wood burning steam locomotive built for service in the USA. Through various owners, amazingly the locomotive always retained its number 3.

In 1942, J. H. Chambers & Son acquired the No. 3 when they purchased the Cottage Grove, Oregon lumber mill from the Woodard Company. Lorane Valley Lumber Company bought the Cottage Grove mill in 1946, and the No. 3 along with it. No. 3 was sold yet again in 1951 to The Robert Dollar Company of Glendale, Oregon.

The No. 3 worked for the Robert Dollar Company until 1959, when it was donated to the San Francisco Maritime Museum Association for a proposed transportation museum. That museum did not materialize and today’s Maritime Museum focuses only on ships and the maritime history of San Francisco. In 1978 the No. 3 was leased by, and later donated to, the Bay Area Electric Railroad Association (now called the Western Railway Museum) at Rio Vista Junction, California.

The No. 3 was moved to Niles Canyon piece-by-piece. All parts were loaded onto trucks for transport to the Niles Canyon Railway Brightside yard. Since the driving wheels had been removed for repair, the biggest effort was to move the boiler and frame out of the shop to where No. 3 could be loaded onto a truck. After the No. 3 arrived in Niles Canyon, restoration began to return the locomotive to her 1950s appearance in Robert Dollar Company lettering. The engine as repainted in 2019 and its letting completed in early 2021 after delays from the COVID-19 pandemic.

#3 is in operational condition and is used to pull some of our passenger trains on our Niles Canyon Railway. The engine also carries its original ALCO whistle. The bell was purchased by an NCRy volunteer a few years ago, and a new whistle was built using the original bell by Rizzoli Locomotive Works in Niles, CA after a successful fundraiser to raise the money to pay for the work. The whistle is dedicated to Pacific Locomotive Association Founding Member, Henry Luna.

We are fortunate to have had many different photographs of the #3 shared with us from various people and sites. Please visit our Life Before Niles Canyon… page for the #3 at the button below to see some of these great photos.