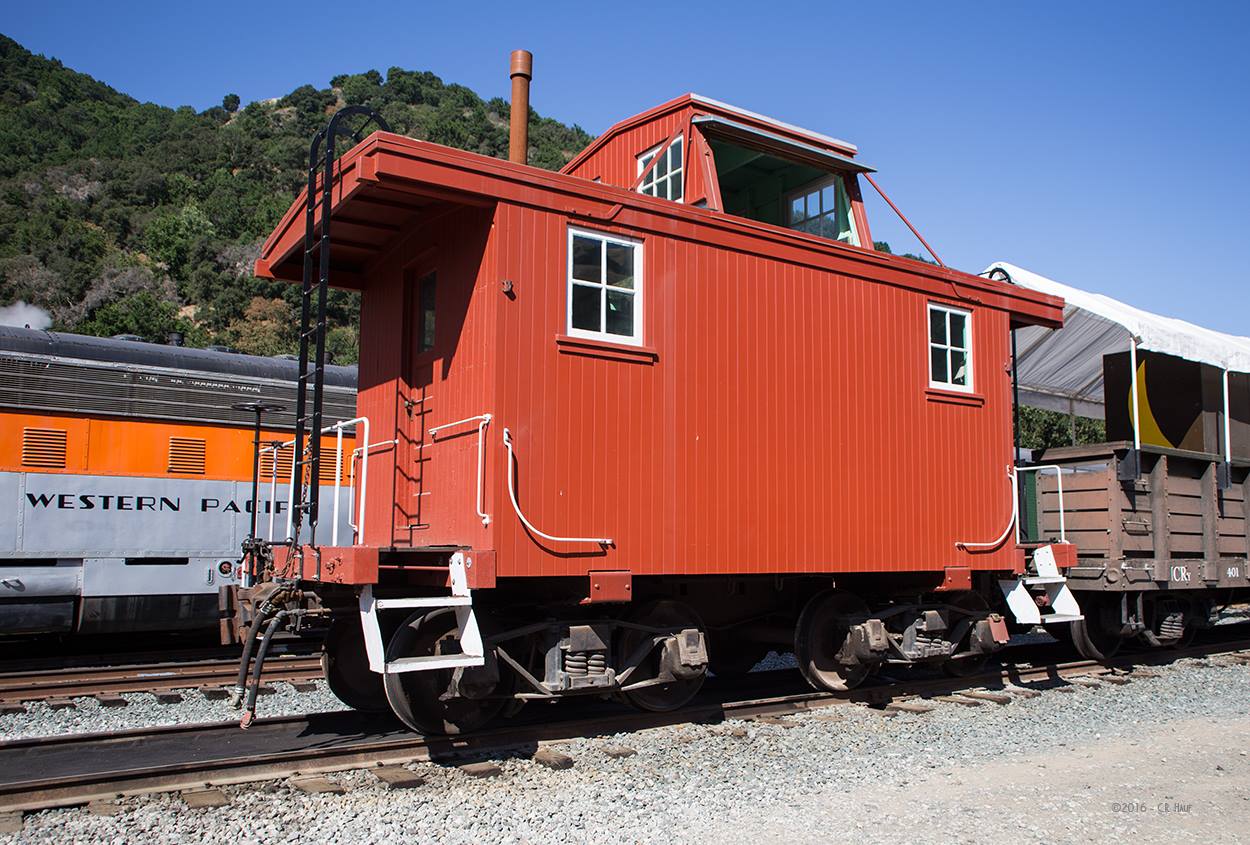 The loggers called their shop built cabooses, “crummies,” as they were equipped with only the most basic amenities for the rear train crew to ride, observe the log cars and control the train brakes. Nonetheless, the crummy was a huge improvement for crews riding inside out of the weather over the early days of logging railroading where the crew road on top of the logs.

An extraordinary example of such a caboose with roots dating back to the late 1930s in northern California’s Tuolumne County, is Pickering Lumber Co, (originally the Standard Lumber Co, dating back to 1901) caboose number 04. The caboose is the only known completely original Pickering caboose left in existence. The caboose interior has been preserved as it looked in service complete with paperwork leftover from the Pickering days. The caboose makes a fitting addition to PLA’s collection of logging equipment (including Pickering Locomotives #5 and #12) and will be used in interpretive log trains when restored to service.

Pickering’s first caboose was an ex-Central Pacific four-wheel “bobber” style caboose, numbered “01”. This was the only caboose used on the railroad until 1940.

During the summer of 1938, a B&B gang member was killed on Chinaman Creek trestle and the Company made no formal investigation which prompted several enginemen to contact the local office of the Brotherhood of Firemen and Enginemen. A meeting was called where, with representatives of the BFE and the Brotherhood of Railway Trainmen in attendance, the Pickering crewmembers voted to unionize. Unionization was likely the impetus for the construction of other cabooses in order to provide the train crews with safe means of riding the log trains.

Bobber caboose #01 was replaced with a new #01, followed by #02 and #03. These three were reputed to utilize the frames and trucks of short Russel log cars, although #02 had a entirely wood frame (which was the deciding factor for its non-use during the 1971 Sugar Pine Railway revival). Cabooses #04 and #05 were constructed from shortened log cars of steel construction. The attached photo of #04 was taken in October, 1947 in Twain Harte, CA and exemplifies the “family” look of cabooses #01 – #05.

Caboose #01 was disposed of before the railroad ceased operations in 1964. Caboose #02 may still exist in private ownership, possibly at a winery in Planada, CA. Caboose #03 (resided with plywood around 1960 and known as the “plywood wonder”) exists at Railtown, 1897. Caboose #03 has deteriorated greatly over the years and was severely damaged by fire several years ago. Caboose #05 exists at Railtown 1897, and may still be the property of Dr. Al Nickel who also own(s)(ed) Shay #7 and two other pieces of rolling stock. Caboose #05 burned while in storage prior to moving out of Richmond to Niles Canyon and was subsequently rebuilt by Dr. Nickel at Brightside using drawings drafted up by PLA volunteer, Brian Wise, after visiting and photographing details of Warren’s caboose which is essentially identical in construction.

Long time PLA member Warren Smith, at age 17 had the foresight to rescue Caboose #04 from the scrapper for a purchase price of $350.00. The car was moved by rail from Standard, CA to San Leandro by the Sierra Railroad and the Southern Pacific. A sympathetic local trucking firm helped Warren by transporting the caboose from a siding at the Caterpillar Tractor Co. to Smith’s family home in 1966 for another $350. The caboose spent many years on the Smith’s family property and was visible to many BART riders once the system was in operation. In 2011, Warren offered the caboose to the PLA for preservation.

Moving the caboose was not without challenges as development around the Smith homestead including the BART tracks made it extremely difficult for truck access. The cupola was removed after several weeks of preparation to make the caboose a legal height load. The day of movement to Brightside on June 9, 2011 started with the difficult job of turning a 70’ tractor trailer in a 75’ yard. Once the lowboy truck was in place the caboose was winched forward on crude snap track. The rail was rusty, the wheels were rusty and the truck bolster had not rotated in nearly half a century. As the trucker slowly winched the car towards the trailer, the rear truck, lead axle, outside wheel flange smoothly and quietly climbed the rail, traversed the head and dropped to the ground. With two track jacks, a 3-ton come-a-long and some creative ingenuity, the truck was re-railed and caboose moved to Brightside.

In February 2022, we saw a post to a Facebook group looking for undercarriage details of the Pickering cabooses for the purpose of creating a model. To aid in that and future endeavors, here are some recent pictures on, in and under the #04. Photos courtesy of Christopher Hauf – Used with permission.