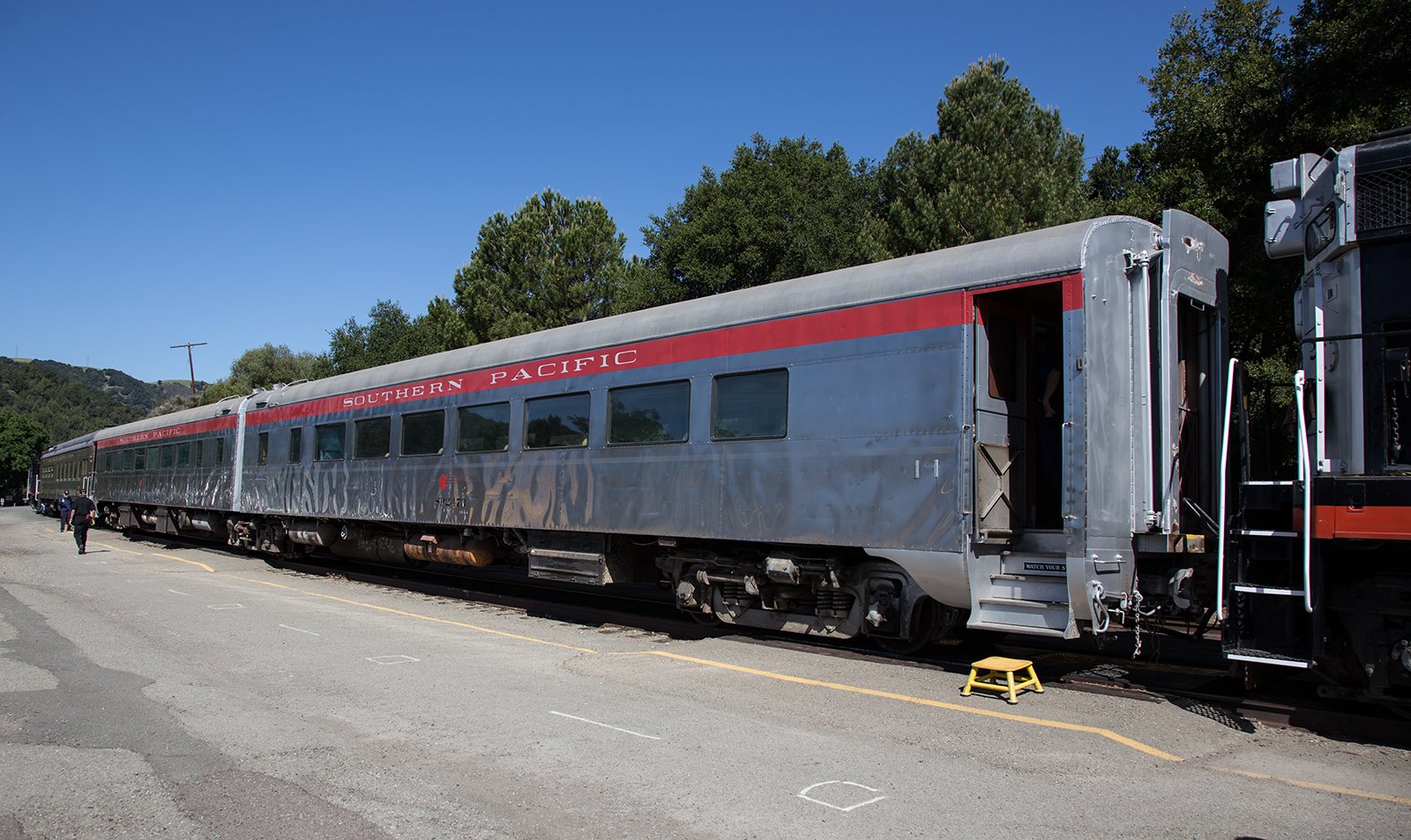 This car was part of a series of cars built new in 1941 for the Southern Pacific Railroad, for its flashy Daylight day train service between San Francisco and Los Angeles. It carries the flat stainless steel siding and simplified paint scheme of an extensive renewal at SP’s Sacramento General Shops during the Spring of 1963.

As built, the car had fluted siding under stunning coats of Red, Orange, and Black paint — said to have been chosen for its resemblance to California Poppies and the setting Pacific sun. Its unusual configuration — two car units sharing a common set of wheels under an articulated semi-permanent connection — was popular in early streamliner days of the 1930s, but fell out of favor because it limited the railroad’s ability to add or remove single cars as business ebbed and flowed. But SP retained this type of car long after other railroads had abandoned it, and the type is a distinctive hallmark of the Southern Pacific passenger train fleet.

The car was built for luxurious day travel, featuring the modernistic advances of foam rubber seat cushions and fluorescent lighting. Wide picture windows guaranteed a brilliant view of 113 miles of Pacific coastline, the hills of San Luis Obispo, the agricultural hub of the Salinas Valley, and an entry into the heart of downtown San Francisco within sight of the Bay Bridge. The car was equipped with a train radio for music and entertainment, and SP 2473 still wears its antenna posts. Each unit had a dedicated lounge area for Men and Women passengers; the Men’s lounge of SP 2473 has a sofa and acted as a smoking area; the Women’s lounge in SP 2474 had a makeup table and mirror. The car with a Women’s lounge (the “ACW” of the railroad’s Class designation) was always intended to operate to the rear of the train; modesty of the era dictated that other passengers should not be looking forward to see women coming and going from the restroom!

This car operated on the Coast, San Joaquin, and Sacramento Daylight trains, as well as many other SP scheduled and special trains, during its thirty year career. On one of those special excursions, our Articulated Chair Car was the first passenger seating car in a PLA-operated “Truckee Express” seventeen car special round trip from Oakland, operating behind an American-built Diesel-Hydraulic cousin of our German Krauss-Maffei, SP 9010.

In April of 1971, SP passenger service ceased, and much of their equipment was sold to Amtrak. The unique mechanicals of SP 2473-2474 were a bit too exotic for the newly formed national passenger rail network, and it was not taken up permanently by Amtrak. It was sold to the Algoma Central Railway of Canada in 1974 and renumbered 458-459. Bytown Railway Society purchased the car in 1988, selling it to the Golden Gate Railroad Museum in 1996. The Pacific Locomotive Association purchased it from the GGRM in March 2008, and began restoration to SP appearance.

Initial refurbishing by the PLA at Brightside allowed the car to return to  operational status on the Niles Canyon Railroad in November of 2008. At that time, the dual tubular steel rotating and reclining seats in each unit were reupholstered, and the interior aluminum panels and trim had many layers of paint removed. In 2011, the car was removed from active service for major repair and sealing of the roof; this included adding new material at the roof line, fabricating new material around the air conditioning access covers, and application of a 20 year roof coating. The exterior stainless steel was cleaned and the Scarlet stripe and SP-style lettering were applied. Roof and car ends were painted in Simulated Stainless Steel.

In 2012, interior restoration continued with focus on the men’s and women’s restrooms and painting of the interior, which is being done to the art deco standards of the four-color 1941 Apricot and Green Schemes, highlighted with extruded aluminum trim between colors. The car returned to service for the 2012 Train of Lights, and continues to be a popular attraction on Niles Canyon trains.