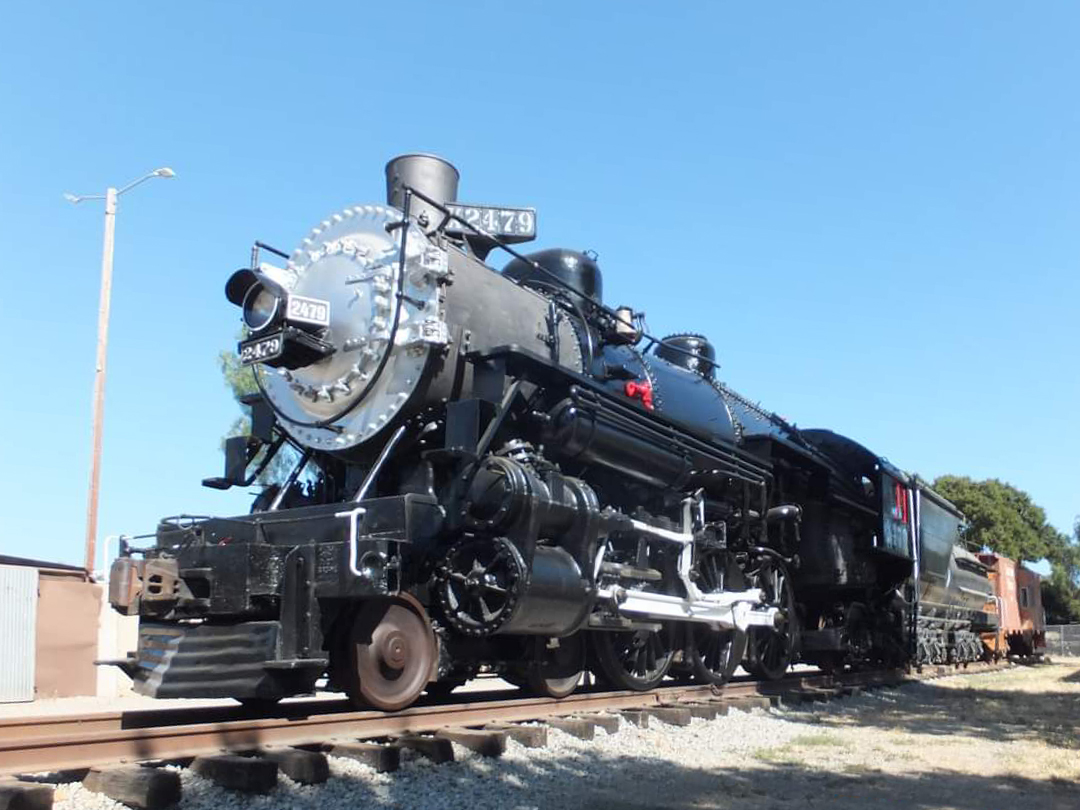 The California Trolley and Railroad Corporation (CTRC), based in San Jose, will be relocating the former Southern Pacific Railroad steam locomotive, number 2479, and the Lenzen Roundhouse structure and turntable to the Niles Canyon Railway, operated by the Pacific Locomotive Association (PLA).

Built in 1923, Locomotive 2479 finished its active career pulling commuter trains between San Jose and San Francisco for the Southern Pacific Railroad. 2479 retired from service in 1956 and was donated Santa Clara County in 1958.

Since 1989, the volunteers of the Santa Clara Valley Railroad Association (Now named CTRC) have averaged over 5,000 hours per year on the restoration of SP 2479. This amounts to approximately twenty-five person years expended. To date it is estimated that 80% of the restoration effort has been completed to the locomotive.

“Moving these important historical artifacts to the Niles Canyon Railway enables our organizations to better preserve the rail history of the Bay Area and to honor the thousands of hours donated by our volunteers. This partnership is an ideal opportunity to preserve these irreplaceable resources for future generations,” said Ken Middlebrook, CTRC president. “We greatly appreciate the vision of the Santa Clara County Board of Supervisors for helping CTRC and PLA to realize a regional approach to the preservation of our shared history.”

“Our master plan has always included a roundhouse facility in Niles,” said Henry Baum, president of the Pacific Locomotive Association. “Both the roundhouse and locomotive are natural additions to our historic railroad collection. We will immediately begin to develop our Niles site focused around these incredible assets. A topological survey of our Niles site will be undertaken to allow design work to commence. PLA volunteer and Architect Randall Ruiz will be leading this design effort, assisted by Architect Marvin Bamburg who oversaw the deconstruction of the roundhouse when it was originally donated to Santa Clara County. The PLA will begin to aggressively search for the necessary grants and corporate sponsorships necessary to get this development project completed. We are also grateful to the CTRC Volunteers (most of whom are also PLA members) who will continue to work on returning this locomotive to being fully operational.”

To aid in these efforts, Steam Services of America, a national recognized steam locomotive contractor will manage the complexities of dismantling, moving, and reassembly of the 150-ton locomotive. The Santa Clara County Board of Supervisors has funded the moving costs to occur over a three-year period. Once received, all of these Santa Clara County owned historical assets will be transferred to the Pacific Locomotive Association. Also included in this historic transfer of assets from CTRC are a 65-ton diesel locomotive acquired from Kaiser Permanente Cement, and necessary tools and equipment to complete the restoration and maintain the SP2479.

Pacific Locomotive Association
The Pacific Locomotive Association, an IRS 501(C )(3) community-benefit non-profit organization, is celebrating its 60th Anniversary in 2021. From a group of 6 friends who formed together to preserve the last aspects of steam railroading back in 1961, the PLA has grown to an organization that boasts almost 1000 members and many historic railroad artifacts that have been rescued and restored over the years. The PLA is an all-volunteer organization and has no paid staff. The PLA owns and operates the Niles Canyon Railway.

California Trolley and Railroad Corporation
Founded in 1982, the 501(C)3 non-profit California Trolley and Railroad Corporation is dedicated to preserving the historical railroad legacy of the Santa Clara Valley for the educational and recreational benefit of current and future generations. The CTRC currently operates vintage trolleys and a historic display of railroad equipment at History Park in San Jose.