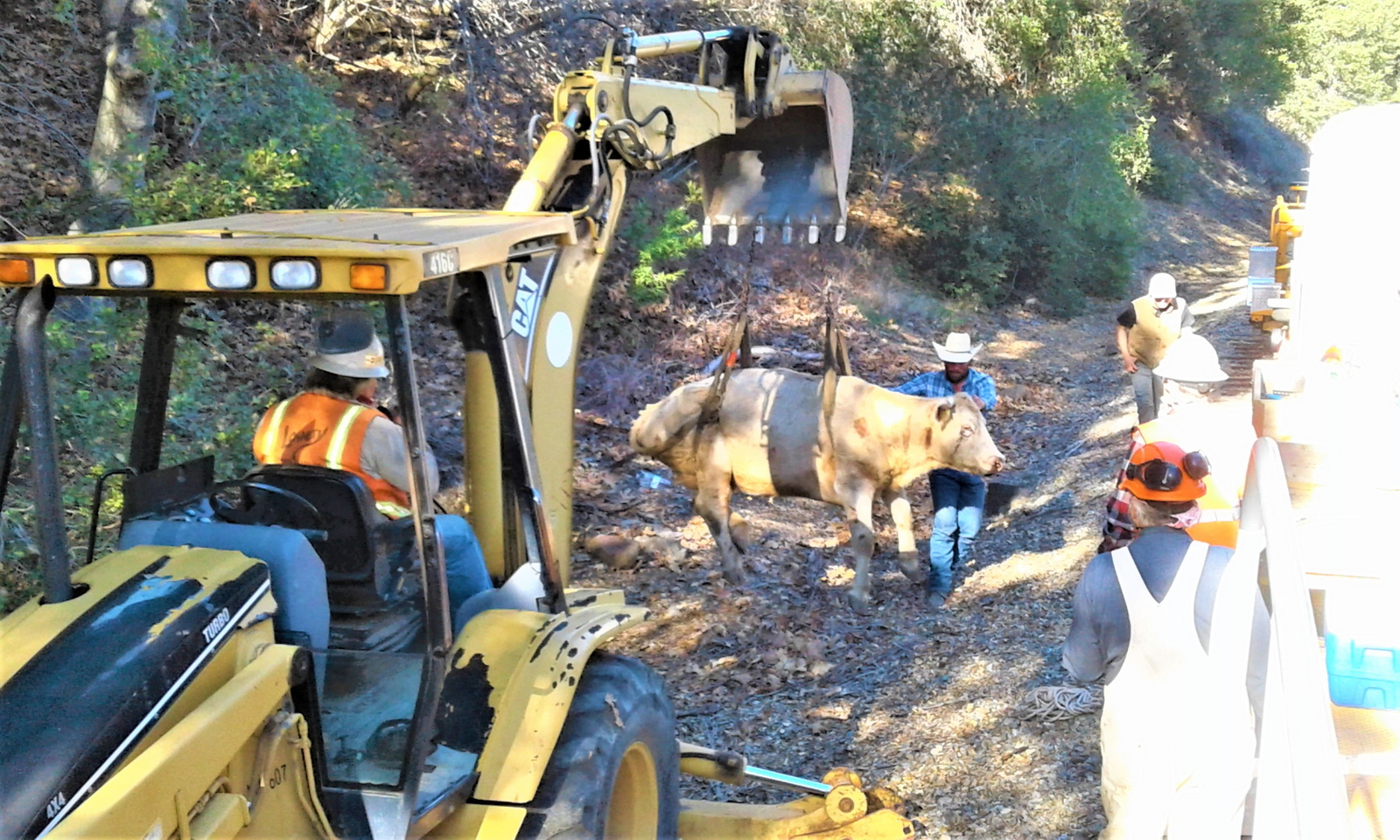 The Niles Canyon Railway winds through the canyon on a right-of-way first constructed in the late 1860s as part of the Transcontinental Railroad.   The volunteers, who operate and maintain the railroad, appreciate the scenic rural beauty and the freedom from high density living, just minutes away.  The railroad passes by very few homes and a lot of ranch land.  Because of its isolated nature, the railroad volunteers are the first to observe and report hazardous conditions on adjacent properties such as fallen trees, power lines, plugged stormwater culverts, and the occasional backyard brush fire.  They also encounter stray sheep, goats and cattle that have snuck through fences and wandered onto the right-of-way.

On Sunday, January 17th, 2021, two volunteers were working out in the canyon to clean up a very large oak tree that had broken in two, creating a fire hazard.  On their way, they spotted an adult cow that had slid down a hill, under a barbed wire fence and lodged itself between a couple of solid rocks at the base of the slope, 15 feet from our railroad tracks.  The animal was alive, alert, and laying on its side, but because of its position, was unable to get itself up.

Using a list of neighbors’ contact information maintained by our museum for such an emergency, the railroad volunteers were able to locate the correct cattle rancher and direct him to the site.  The ranch foreman arrived to assess the situation.  It was a cattleman’s worst nightmare; a downed (and possibly injured) animal weighing 500 to 600 pounds in a place inaccessible to trucks and trailers or horses and cowboys to deal with the scenario using the traditional methods.  Short of air-lifting the cow using a helicopter, there were no easy solutions to the problem.

Luckily, the railroad’s General Manager, and professional heavy equipment operator, Stephen Barkkarie, happened to be at home in nearby Sunol enjoying a well-deserved Sunday off.  He was contacted and arrived on scene with the railroad’s Caterpillar backhoe, which is specially equipped to be able to travel on railroad tracks.  Minutes later, the cattle owner and a crew of 4 cowboys arrived.  Two of them were wearing rowel spurs.  These guys were the real deal.

In short order the ranch hands threaded a couple of nylon soft slings provided by the railroad under the cow, and attached them to the bucket of the backhoe.  The cow was hoisted onto a railroad maintenance “pushcar”, then transported on the tracks 1/4 mile to an access gate through an adjoining neighbor’s property where it was hoisted off onto an awaiting trailer.  It was very lucky that the neighbor happened to be working on the property at the time to permit access.  All indications are that the cow was not severely injured by the accident and will make a full recovery and will be suckling little calves of her own in the late Spring.

At a time when we are increasingly socially isolated from our neighbors, it is heartening to know that there are those who watch out for each other, and will take time out to lend a hand . . . or backhoe . . when the need arises.