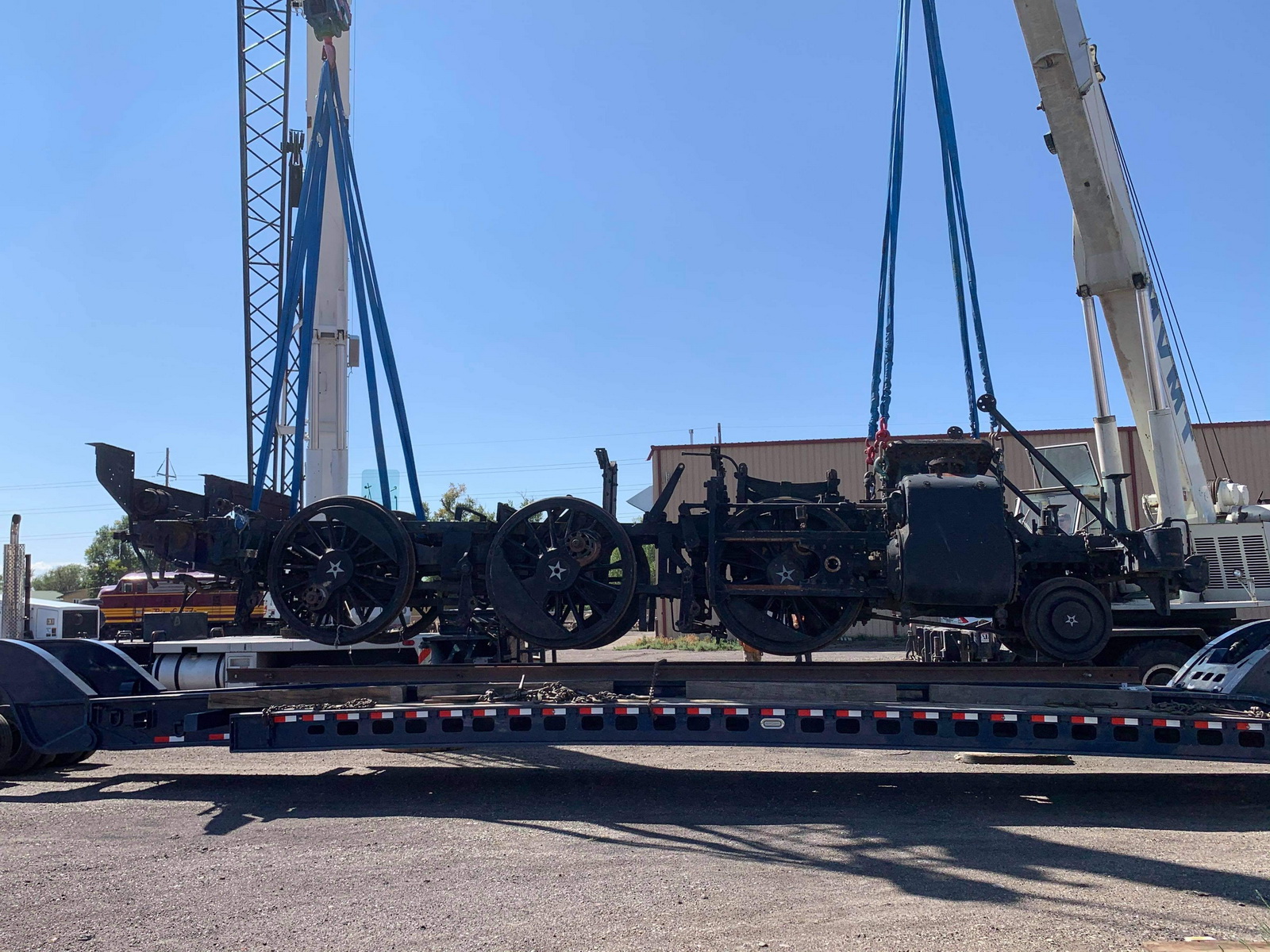 The move of the SP 1744 frame seemed to be a simple process but as usual nothing is simple and things got more complicated as we delved into the details.  The frame & running gear being over 10’ wide would be a wide load on a truck, but what type of truck would be required?  While we knew the weight of the locomotive, what would just the running gear weigh?  Using our resources, we talked with anyone we could think of that had moved a locomotive in pieces to see if they had weights on both the boiler and frame and got the best information from Steve Lee of Wasatch Railroad Contractors who supervised the recent move of the SP&S #539 2-8-2 from the Grand Canyon Railroad back to Washington.  His weights on the boiler and running gear gave us a rough approximation of the running gear percentage of the total locomotive weight.  As we knew the weight of all the parts shipped in March, the parts weight was subtracted from the locomotive weight to get an estimated weight of 113,400 pounds for the boiler and running gear.  However, we did not know the weight of the boiler shell as it sat in Alamosa.  Not knowing the boiler weight, we could only estimate the running gear weight and it was too close to 80,000 pound weight limit to risk using a shorter trailer, so Renn Transportation ended up using a nine-axle truck and trailer able to carry more weight.  Fortunately, we did use the bigger trailer as based on truck scale weights the running gear ended up weighing around 90,000 pounds.

In Alamosa, Stathi Pappas removed the grease cellars and prepared the frame to roll by cleaning the axles and applying new grease.  The axles were blocked so they would stay in position when the frame was lifted.  Stathi supervised on August 31st, 2020 as two Monte Vista Crane Company cranes lifted the running gear off the rails and onto the rails of the waiting Renn Transportation truck.  In addition to our thanks to Stathi for his help, the PLA wants to give a huge thank you to the San Luis and Rio Grande Railroad employees for their assistance with the move.

Peter, our driver with Renn Transportation, skillfully drove the loaded truck over the Continental Divide across 10,857 foot Wolf Creek Pass heading west through Colorado, then Arizona, through Las Vegas, onto I-15 across the California border, over Tehachapi to the Central Valley and into the Bay Area.  PLA volunteers built an unloading ramp at Brightside Yard on September 2nd and the locomotive running gear was rolled off the trailer and onto the rails of the Niles Canyon Railway.  The long journey back home to California is over where the locomotive began its career working for the Southern Pacific Railroad nearly 120 years ago.

Donate via ClubExpress to this project